The National Institutes of Health-led All of Us precision medicine project has enrolled 230,000 participants with another 40,000 people registered.

The National Institutes of Health-led All of Us precision medicine health research database project has enrolled 230,000 participants as of July 2019, with an additional 40,000 people registering on the website, according to researchers involved with the project. 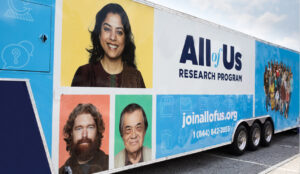 Of those participants, 175,000 have contributed personal information, biospecimens, physical measurements and shared electronic health record data, researchers from participating organizations, including the Vanderbilt University Medical Center’s Departments of Biomedical Informatics and Medicine, the National Center for Advancing Translational Sciences, and the National Institutes of Health wrote in a report published in the New England Journal of Medicine on Thursday.

When the NIH announced the All of Us initiative in 2015, it kicked off the largest health and medical research program on precision medicine with the goal of collecting health data on 1 million people. The program opened enrollment nationwide in May 2018 after an extensive period of beta testing.

Currently, more than 340 recruitment sites, mostly within healthcare provider organizations, have been established. To date, 34 health care provider organizations have uploaded EHR data on more than 112,000 participants. The recruitment rate, which is currently approximately 3,100 core participants per week, is predictably increasing as new sites begin enrollment and existing sites mature, the researchers wrote.

Program officials expect to have enrolled 1 million core participants by 2024.

In May, the NIH announced the beta release of its interactive data browser to provide a preview of the data that study participants are sharing for health research.

The All of Us project also is making good progress towards its goal of recruiting persons in demographic categories considered to be underrepresented in biomedical research; such persons typically have relatively poor access to good health care, program officials said.

Among core project participants, 51% are nonwhite and 80% meet the program’s definition of being underrepresented in biomedical research, according to researchers.

Along with aiding in population health research, All of Us participants will have access to their own data and most results of research testing. Participants will be informed if they have highly penetrant genetic variants known to cause serious diseases for which there are established interventions.

“We estimate that over the course of collecting and analyzing data on the entire cohort, approximately 30,000 persons will receive actionable findings for American College of Medical Genetics and Genomics genes and more than 90% may learn of actionable pharmacogenomic variants,” the researchers wrote.

NIH officials believe the All of Us research database will help to improve understanding of health and disease to support accurate diagnoses, treatment selection, and the development of targeted therapies.

But the program faces substantive challenges, researchers noted, such as reaching residents in rural areas or far from recruitment sites. One alternative strategy could include collecting saliva specimens from kits that can be mailed rather than using blood specimens for DNA collection.

Harmonization of EHR data elements also can be challenging, the researchers noted, but there are examples of success.

While EHR data can be fragmented, incomplete and inaccurate, data from EHRs have already proved to be a powerful and efficient discovery tool, the researchers noted in the report.

“Our hope is that identification of risk factors and biomarkers (including environmental exposures, habits, and social determinants) will improve population health by bringing about more efficient and accurate diagnosis and screening, better understanding of diverse populations, more rational use of existing therapeutics, and the development of new treatments,” the researchers wrote.

Further Reading:
All of Us Research Program Special Report – NEJM