His daughter Annabel has a rare disorder. He’s developing a novel gene therapy.

Annabel has an ultrarare genetic disorder called alternating hemiplegia of childhood (AHC). Her father, Simon Frost , is now listed as an inventor on U.S. and international patent applications for a developing gene therapy and its delivery method. 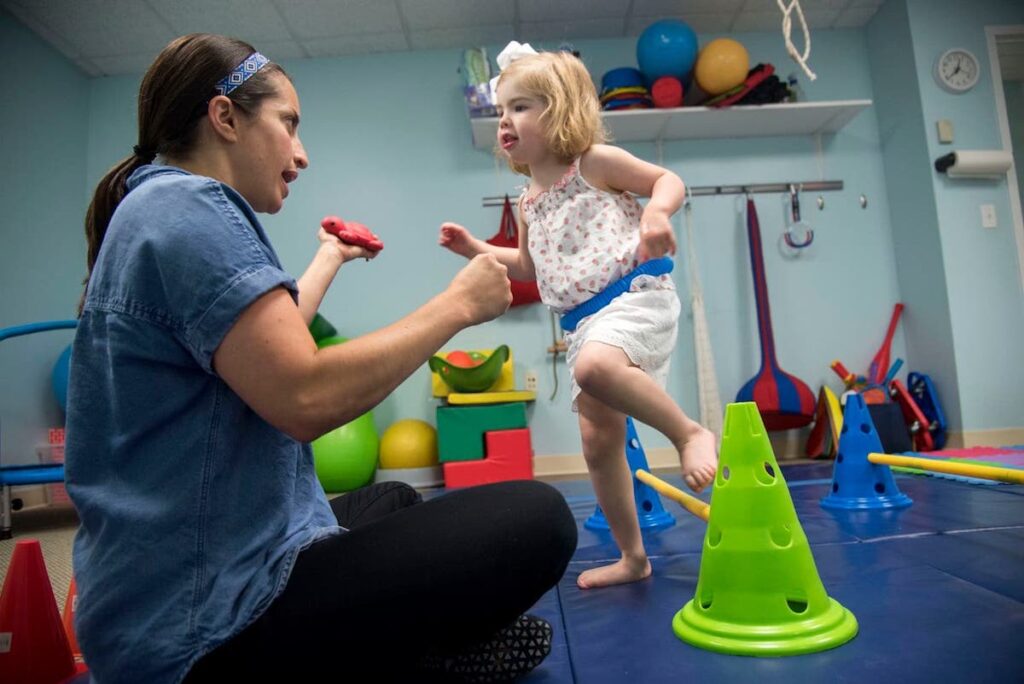 Annabel does exercises to practice stepping over an object with a physical therapist at Dinosaur Physical Therapy in Washington. (Marlena Sloss/The Washington Post)

It had been two agonizing years of not knowing what was wrong with their baby who, since birth, had frequent spells of eye flickering, uncontrollable muscle contractions, pain and temporary paralysis. Simon and Nina Frost had spared no expense, taking Annabel to all the best neurologists around the country.

Finally a potential diagnosis emerged: alternating hemiplegia of childhood, an ultrarare genetic disorder. The Frosts’ initial excitement at having answers quickly waned, however.

They learned that, for many of the 900 or so children in the world affected by AHC, mutations in one of the genes that code for a subunit of the body’s critical sodium potassium pump interferes with the body’s ability to repeatedly fire nerve cells. In addition to Annabel’s other symptoms, difficulty breathing, choking and falling are common.

They also learned that there is no effective treatment or cure, that any one of Annabel’s episodes has the potential to lead to permanent brain damage or death, and that it is hard to get information about the disease.

Foundations dedicated to AHC informally recommend only four physicians in the United States as knowledgeable enough about the disorder to see patients. Of those who are closest to the Frosts, who live in Northwest D.C., one was too busy to see Annabel.

There was a two-month wait to see the other one. The foundations themselves didn’t have many answers to the Frosts’ initial questions about life expectancy or what course Annabel’s disease might take. The Frosts discovered that relatively few scientists and clinicians study AHC, and their focus seemed to be basic research and not developing a therapy.

Simon Frost says he felt as though they were on their own.

The real estate investor and developer and former rugby player had no background in science, “but honestly,” he says, “I felt like the only way to get towards any type of therapy for Annabel and AHC kids was to do it myself.”

Over the next two years, Frost pursued the science of AHC.

He is now listed as an inventor on U.S. and international patent applications for a developing gene therapy and its delivery method. Frost also has become a project manager, coordinating many parts of the research — and playing a role in designing some of it — that could lead to new treatment for his daughter. He is now heading up an effort to develop a novel gene therapy with the goal of getting it to clinical trial.

He and Nina Frost have invested $150,000 of their own money and created the Hope for Annabel Foundation to fund the research. Along with two other U.S.-based groups, Cure AHC and Alternating Hemiplegia of Childhood Foundation, they’ve raised about $750,000 collectively this year for the early research effort. Scientists inside and outside the project say it will take anywhere from an additional $3 million to $5 million or more for the additional steps to get there — and have a clinical trial if it gets that far.

When it comes to funding and research for diseases, “it’s not who needs it most, it’s who agitates and presents a compelling enough argument,” Frost says. “And to get to that compelling argument, you need money and sophisticated scientists.”

He is not the only parent who has come to this conclusion.

There has been an explosion in the number of parents and foundations seeking out gene therapies in the past five years, says Steve Gray, a molecular biologist and associate professor of pediatrics at UT Southwestern Medical Center.

There are more than 7,000 rare genetic diseases like AHC, Gray says, most without treatment options. He specializes in developing gene therapies for rare diseases for families and foundations and helps move them from preclinical testing into clinical trials.

Gray, who also serves as director of the UTSW viral vector facility, was hired by Frost and his partners last November to build and produce a “second generation” AAV vector. AAV stands for adeno-associated virus. In this type of gene therapy, the virus is engineered as a vector to carry DNA that encodes a functioning gene into target cells.

Gray also provides guidance at all stages of the research process including efficacy and safety studies through manufacture and toxicology and into a possible clinical trial. Every few weeks, he receives an inquiry from a parent of a child sick with a rare disease looking to explore developing a gene therapy. He was hired by Lori and Matt Sames 11 years ago, while still at the University of North Carolina, to develop a treatment for their daughter Hannah’s rare disease, giant axonal neuropathy; they successfully got it to clinical trial over four years ago. (The research team has presented data showing the progression of the disease slowing for those in the trial.)

“As a parent, you know that you would do anything — and everybody will say that they’ll do anything,” Gray said. “But it really is kind of a special breed of person that can actually do this.”

‘I Just Wanted to Understand’

Frost approached his daughter’s illness the way he approached his businesses. Once, while working with a Chinese company, he spent a few months learning basic Chinese so he could understand his colleagues better. After Annabel’s diagnosis, he had to learn a new language. He kept a glossary of unfamiliar terms as he pored over the medical literature. Sometimes one journal article would take him eight hours to read. For a year, he would wake up at 3 a.m. to read before work, and then again at night and all weekend.

“I just wanted to understand what this disease was like at a molecular, cellular level,” he says. “What was it doing to my child? And figure out what drugs and therapies there were available immediately because my doctors didn’t know.”

Frost placed an ad on the freelancer site Upwork for a scientist who could work as a consultant. He found Natalia Morsci, an experienced cell and molecular biologist who has worked at National Institutes of Health. Frost has been working with her ever since in identifying treatment options and making scientific decisions.

After six months of studying the scientific literature with Morsci, Frost began to formulate his concept for a type of gene therapy, in which the adeno-associated virus delivers functioning genes to cells to compensate for dysfunctional ones. He traveled to Aarhus University in Denmark, where he pitched scientists on his idea of treating AHC with AAV. One of them, Karin Lykke-Hartmann, became an important scientific adviser to Frost’s team.

Through the help of a member of Congress, Frost landed a meeting with NIH scientists.

Chris Boshoff, a program officer at the National Institute of Neurological Disorders and Stroke at NIH, was among those who met with Frost to discuss his ideas for a gene therapy and how it might be funded. The two men stayed in touch. Only later did he realize that “this guy’s actually studying this,” Boshoff says. “Like any other scientist would do. So that is quite extraordinary.”

Frost later met with Gray at a gene therapy meeting in Chicago. At first, Gray was skeptical about whether AHC was a good candidate for AAV-mediated gene therapy. But after talking with Frost further, Gray was impressed: “He had latched on to all the key, the key pressure points, you know, the key considerations. And had grasped a lot of the science about what needed to happen to move this forward.”

Gray has seen other parents try to project manage to varying degrees and says the level of Frost’s work is not typical.

Frost decided early on against hiring one academic group to do all the preclinical work needed to develop a potential gene therapy, which many parents of children with rare diseases do, because of the associated high costs and long timelines. Instead, he contracts with a variety of research organizations in conjunction with Gray’s lab. Frost recruited and collaborates with 20-plus doctors and scientists who are part of the broader project team.

There are issues with this gene therapy project, experts acknowledge, including the size of the gene being used. In the first round of testing on healthy mice to test for biodistribution, the AAV vectors were injected too deep into the brainstem of mice. The testing had to be redone.

Frost’s team is also developing a line of mice with AHC to eventually test whether the gene therapy can reverse or mitigate AHC symptoms.

The female mice are too sick to reproduce, so the team uses in vitro fertilization with male mouse sperm. At one point a few months ago, there appeared to be only one living male AHC mouse, but it was swept out of its cage accidentally. Upon reading this news, Simon Frost had to walk away from his computer to avoid writing something nasty back. Nina Frost cried. (It turned out there was another male mouse, and its sperm can be used to continue the line.)

‘It weighs on you’

Annabel, now almost 4, is an inquisitive and friendly child. She can walk, though she’s a bit hunched over. It’s clear from her frequent chiming in that she enjoys interacting with people, although her motor loop difficulties limit her to speaking in one- or two-word phrases. She’s on a strict nap schedule — lack of sleep is a trigger for episodes.

On a summer afternoon at the Frost home, Simon Frost looks at the results from studies on how efficiently the AAV vectors carry the gene into the brains of healthy mice. Annabel peers over the laptop screen with interest, and he moves the computer so she can see, too. A new lab has redone the previously botched testing on the healthy mice, and the results are promising, Frost says.

When Frost talks about the project, he sounds like a scientist. When he talks about Annabel, he’s an adoring father.

She’s incredibly loving and caring, he says, and “spends her whole life wanting to make friends and learn things.”

She loves choosing clothing for other people.

Nina and Simon have cried more than they ever have in their lives, he says. There is also the pressure to ensure their older daughter, Clara, 7, has as normal a life as possible.

“It weighs on you,” Frost said.

When a university that had already grown an AHC mouse line declined to share it because researchers thought Frost’s project was duplicative, the setback was personal and painful. There was much more at stake than science. At stake were the things that Simon Frost wants most for Annabel: to walk and talk normally, to be able to hold a job, have a boyfriend and maybe a family.

But it’s not just Annabel; there is a whole community of families with an AHC child relying on him to succeed.

A little bit of sperm from a male mouse would have saved a year of time for their project, Frost says.

“And when you’re sitting with a child, that’s a quarter of their life.”